We are 4 weeks old today!

It has been a busy week for the puppies. They have begun to eat real food and have given Mom her walking papers.

With Mom gone, they are experiencing some changes to their environment. With the addition of some potty boxes and toys overhead, the landscape has evolved and it will take some getting used to.


After a thorough housecleaning and a big breakfast some of the pups are exploring while others are resting up for their next adventure.


This coming week will be pretty much the status quo and then on May 1st visitors are coming. Grandpa and Grandma Bryan have already been to see us but now Grandpa Randy and some of Ollie's family are coming! We are very excited for them to see us since this will be their first time and we hope to make a good impression!

After that the puppies will be going to spend a couple of weeks with Mom while I am in Tulsa at the National. Then they will come back home for hearing and temperament testing and will be topping off their last week here with a final evaluation and a puppy party!
Posted by Smiling Dalmatians at 2:43 PM 1 comment:

This week I started introducing the puppies to real food. It was unanimous, they loved it!

Since I will be leaving the puppies in Mike and Gail's capable hands for 2 weeks while I go to the National in Tulsa, OK I wanted to make sure the pups had plenty of time to transition to eating something besides their mother's milk. I will be leaving in about 2 weeks so they should be pretty well adjusted by then.

Here are some pics of the new discovery. 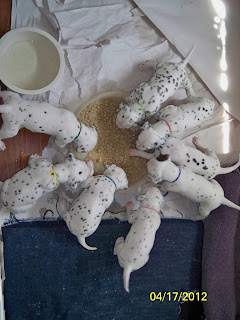 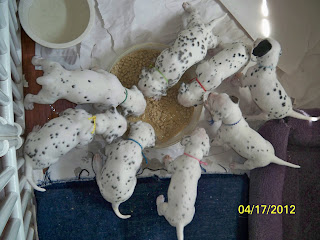 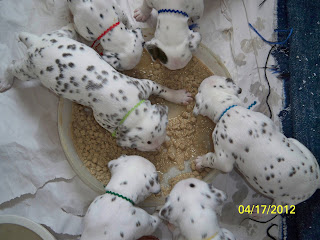 The eyes have it!

Well I have been sick with the flu pretty much since the puppies were born. However, I did manage to take some pics of them today. Now at 2 1/2 weeks of age, their eyes are open but are still that blue gray color. I am seeing them begin to kind of play with one another, barking little squeaky barks and biting each other. It is too funny watching them as they go up to a sibling and begin gnawing on a foot or leg. They are moving around quite well, several have already managed to make it out of the wading pool they are in.  I think they are pretty cute myself! 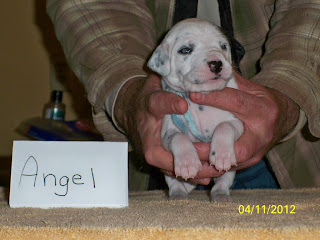 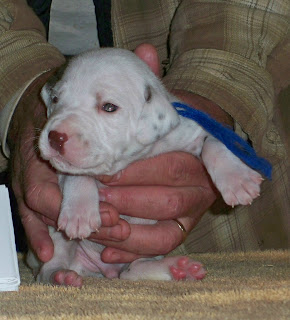 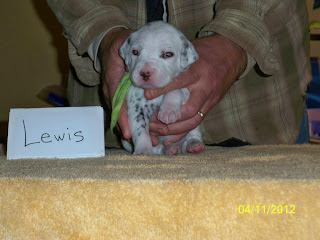 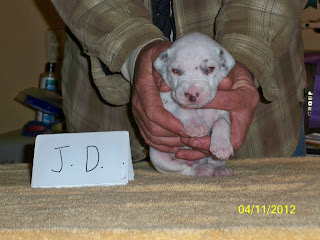 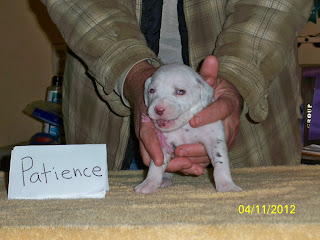 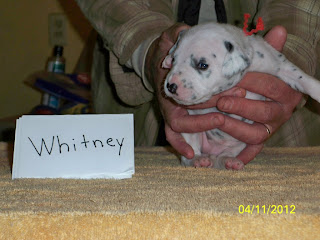 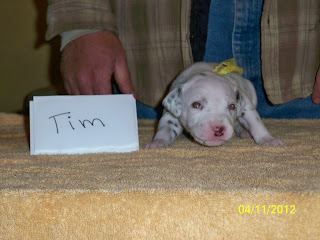 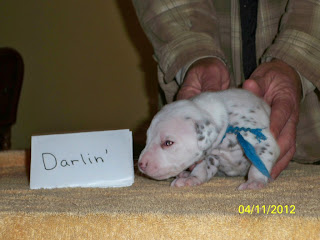 I had some time this afternoon so thought I would get a few more pix up on the puppy blog and write a bit about the puppy names.

The eyes are starting to open and the spotting is becoming visible. As you can see below, some of the pups have more spots showing through than others. 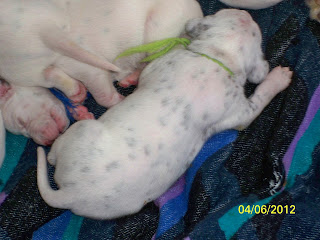 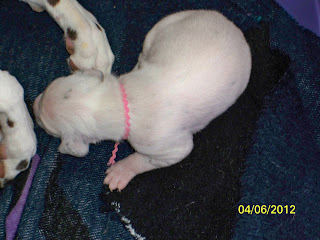 Above are Lime Green boy, Lewis and Pink girl Patience. Right now you can see Lewis spotting pretty well, while Patience has spots that will come through but right now you can't see them quite as well.
Here are a couple of group shots 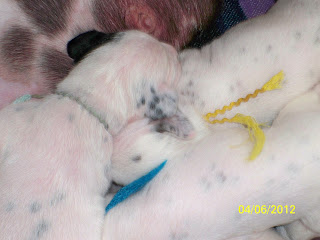 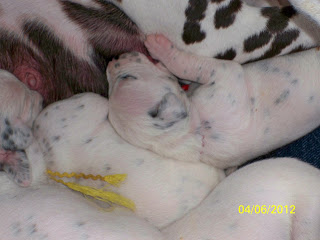 You can see the difference in the spotting on some of the pups. Keep in mind, Red girl Whitney above is black spotted and is laying next to liver spotted siblings.

I thought some of you might like to know the song each of the pups is named for. So here is the list and how I chose each name.

Light Blue girl, black patch "Angel" her song was Centerfold, by the J. Geils Band. In the song, he sings about his "Angel" being a Centerfold in a girlie magazine.

Dark Blue boy, liver patch "Bruno" his song was Just the way you are (Amazing) by Bruno Mars.

Dark Green boy, liver "J.D" (for Johnny Depp) his song was Have You Ever Really Loved A Woman by Bryan Adams. This song was on the soundtrack to the movie Don Juan DeMarco, starring Johnny Depp.

Pink girl, liver "Patience" her song was Waiting On The World To Change by John Mayer.

Red girl, black "Whitney" her song was How Will I know by Whitney Houston.

Teal girl, liver "Darlin'" and last but not least, her song was Best Of My Love by the Eagles. In that song part of the chorus goes "Oh, sweet darlin', you get the best of my love,"

So, there you have it, some black and liver spots to look at and the stories behind the names.

Posted by Smiling Dalmatians at 1:13 PM No comments:

So many things, so little time!

So here we are and the pups are now 11 days old already! I have had so many people asking to see pix of the pups and although up to this point in their development they look like little more than white rats, I really should get something up on this blog.

I recently took on a new job and after over 20 years out of the profession, have gone back to dog grooming. I forgot how much time working full time really does take out of your life and how many things I have had to put on hold, like this blog, since working 6 days a week.

I have been really sick this week so have not been at work. I thought it was a great opportunity to get some things caught up.

Here are some pix of the Ollie x Abby puppies for you to enjoy! 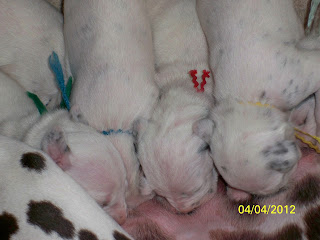 Above is a close up of Dark Green liver boy, Teal liver girl, Red black girl, and Yellow liver boy. 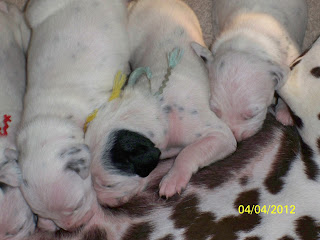 So in birth order we have the following names, and they are subject to change of course.

So enjoy the pix and let us know what you think of the names.
Posted by Smiling Dalmatians at 11:57 AM 3 comments: