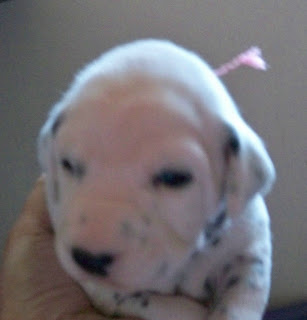 Today the pups are two weeks old. This is Spring, the pink girl. She was the first born and was 12 oz at birth, 1 lb 8 oz at 1 week and is now 2 lbs 10 oz. All the pups have full eye and nose trim and all have what I would call medium spotting. 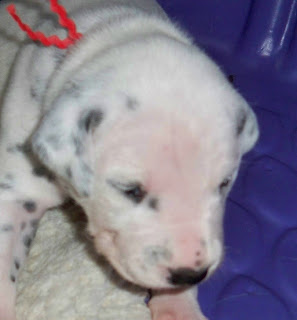 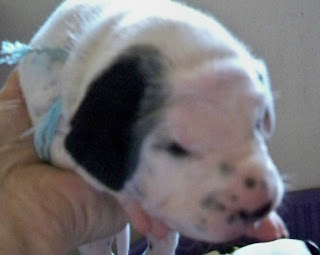 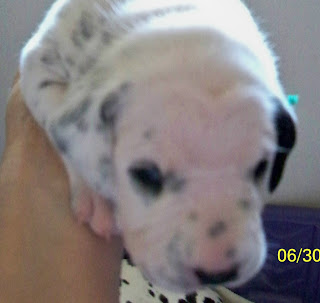 Last but not least is green girl Autumn. She was 14 oz at birth, 1 lb 12 oz at 1 week and is now 2 lbs 10 oz. Autumn has a patch on her left ear.
This next week will be exciting as well as a little scary for me. This is the time when I can begin watching for signs that the pups are able to hear. Their eyes are beginning to open and they will continue to do so in the coming days. They are trying to get up on their feet and soon their wobbly legs will become more steady as they travel around the baby pool.
Soon they will outgrow their enclosure and I will have to set up the play pen to contain them. I don't know how much longer BG will want to continue to nurse them but they will probably be ready for something more in the next week or two. One thing is for sure, they are growing and changing every day. I look forward to seeing what each new day will bring.
Posted by Smiling Dalmatians at 12:19 PM No comments: 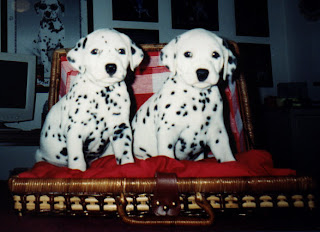 Today I started my first blog. I have been maintaining my own website for a couple of years now. But it is oft times frustrating as I will update a page only to have the server freeze up and not save my changes. SO I decided with this litter I would start a blog.

A little about myself...I have been showing and breeding AKC/INT/UKC Champion Dalmatians since 1993. I do not breed often, at most once a year. This year, however is a little different. Litter sisters BG and Carly are now 4 and neither had produced a litter. Carly we tried to breed last year but the breeding did not take. We are going to attempt to change that later this year.

I had a boy lined up for BG but as we all know, even the best laid plans can change and at the last minute I decided to breed her to my boy Ryder. BG is out of my Angel, INT CH Kastle Smiln Aerial Response and sired by my first "show" Dalmatian, Solomon. INT/UKC RBIS Smiln Dal's Song Of Solomon.

Solomon only sired the one litter so I did not want to lose that pedigree. I also lost both Solomon and Angel earlier this year so breeding BG to Ryder was not only continuing Solomon's pedigree but linebreeding on all the wonderful dogs behind Angel.

You may say, "Sounds like a sentimental breeding to me" and you would be partially right. However, the health and temperament behind both dogs is outstanding and to lose that at the risk of being called sentimental was a risk I was willing to take. Besides, Ryder is not only an INT and UKC CH, but only needs a major to finish his AKC title.

In all the years I have been breeding I have never bred two dogs together of which I was the breeder. This time was the first for me doing just that. While BG is out of two dogs I purchased, Ryder is out of my first BBE Champion bitch Ariel, AM/UKC CH Smiln Dal's Flying Solo. Ariel was out of Angel and CH Kastles Sacred Spirit.

Ryder's sire is INT CH Cielo's Destiny Of The MT, who also comes from Kastle and Of The MT lines. His pedigree goes back to some older Proctor and Esquire lines.

The puppies are now almost 2 weeks old. They are starting to open their eyes, spotting is now visible and looks pretty good so far. All the puppies are of good size and weight and appear to be healthy and thriving.

In the weeks to come I will be posting pics on this blog, that is as soon as I figure out how to do that. Please keep checking back to see what's new. Not just with the current litter, but we will try to continue to update other goings on as well.

Thank you for taking the time to visit, sorry this post was so long but I felt I had to give some background for those who don't already know about us. See you again soon...
Posted by Smiling Dalmatians at 11:21 AM No comments: