Today we got some much anticipated good news! Florence is pregnant!

We bred Florence in May of this year only to be disappointed that the breeding did not result in puppies. The dog we bred to was Cetina Smiln Bout My New Jeans, aka Taylor, beloved dog of Ed and Cynthia Murray. They had one frozen collection on Taylor so when Flo wasn't pregnant they were very disappointed.

Since there was no more frozen semen on Taylor we chose to breed Florence to the very handsome GCH Merry Go Round Express, aka Beau. Beau is a moderate boy with lovely spotting and a fabulous pedigree! 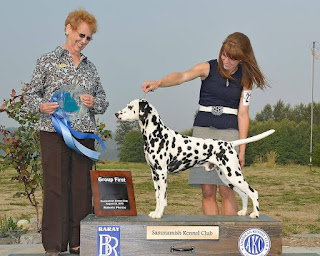 Beau's correct conformation and proper movement have  made him very successful in the show ring, finishing with 4 major wins. You could not ask for better temperament, Beau is very friendly and outgoing and along with Florence's sweet, confident personality, we are expecting some real charmers from this pair!

Florence has lovely dark liver colored spotting, is correct in type and has proper movement. She  finished in 2012 with 3 majors, one of which was at a Specialty supported entry show.  Florence's owners moved up to Idaho earlier this year from California, so I will be able to help deliver the puppies and watch them grow up! 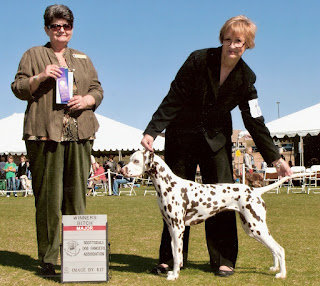 Please stay tuned to our website, www.smilingdalmatians.com and to this blog for more information as it is available.
Posted by Smiling Dalmatians at 4:03 PM No comments:

Pix of all six!

I received some pics today of all 6 puppies. I hope you enjoy looking at them. 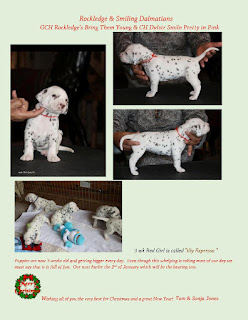 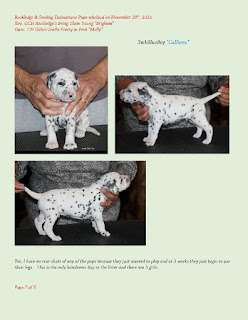 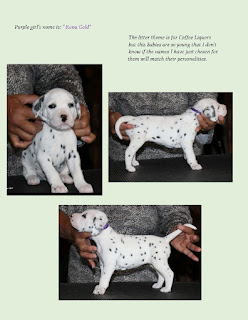 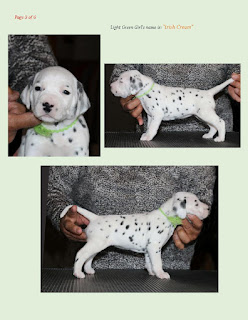 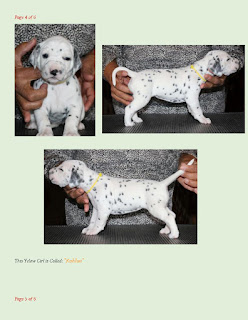 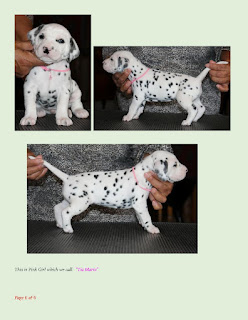 Posted by Smiling Dalmatians at 7:13 PM No comments:

Three weeks and a sneek peek!

The Molly x Brigham puppies are almost 4 weeks old now. Very soon the pups will have their BAER hearing test performed and then a final evaluation for structure and temperament.

More formal stacked photos will be taken soon but I thought I would give you a little taste with some candid shots of a few of the puppies taken a few days ago. I hope you enjoy them and stop back for another visit soon! 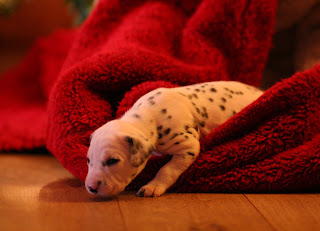 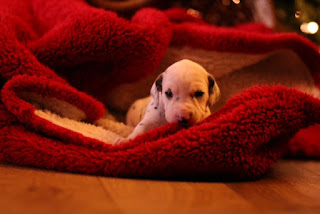 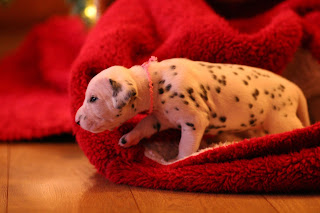 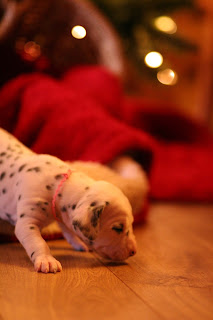 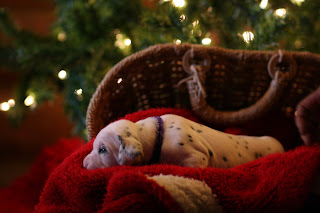 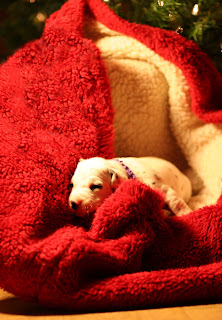 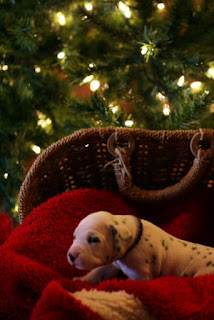 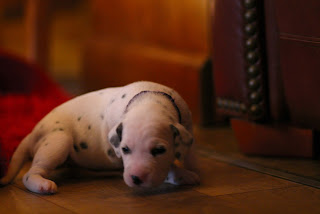 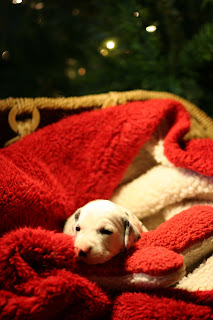 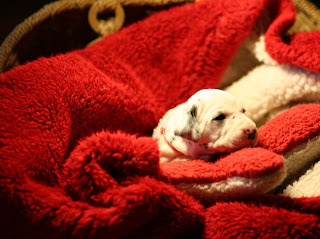 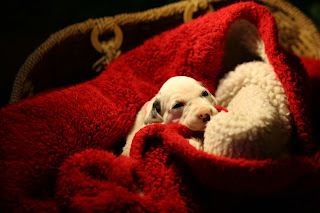 Posted by Smiling Dalmatians at 11:22 AM No comments:

Six more reasons to be thankful this year

I hope everyone had a wonderful Thanksgiving Holiday. This year we have six more reasons to be thankful. On Saturday November 21, Molly, CH Dvlstr Smiln Pretty In Pink, had puppies by Brigham, GCH Rockledge Bring Them Young.

Molly had 5 girls and 1 boy (there was a second boy but he did not make it). All of the six puppies are healthy and strong and I cannot wait to see them!

The puppies were born in Utah at the home of Tom and Sonja Jones. The Jones's have been breeders for many years and asked to lease Molly from us to breed her to their boy Brigham. At some point after their eyes are open I hope to go for a visit.

Their son took lots of pics and here is one of them. This is Molly and her six new babies! 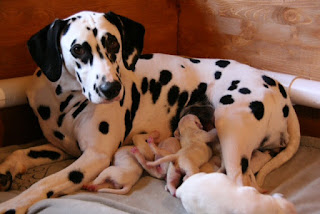 There will be lots more pis to come but for now I hope you enjoy this one!

Molly was bred to Brigham using frozen semen. This means that the timing for breeding has to be pretty exact. Progesterone tests must be done to determine the best time for surgical insemination. The procedure is not always successful but this time it was.

We are so excited about this breeding and the combining of these two pedigrees. And more photos will be added as they are made available. So stay tuned!
Posted by Smiling Dalmatians at 10:44 AM 1 comment:

This morning at about 4:22 am, Molly's puppies started to arrive! But let me back up a bit. On Thursday Molly had an xray to see how many puppies she was having. 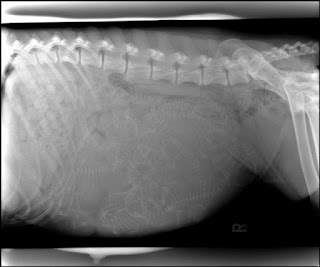 As you can see, it appears there are 7, possibly 8 heads and spines in this photo. Then yesterday Molly threw up her breakfast, often a sign that puppies are on the way. 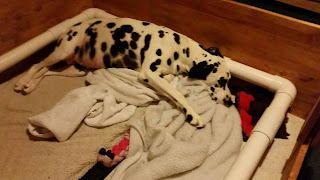 Here is a pic of Molly in her whelping box, getting ready for the big job ahead of her. 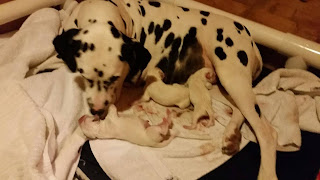 Here is Molly with the first 3 puppies. More on the way!
Posted by Smiling Dalmatians at 10:41 AM No comments:

Where did it go?

Oh my gosh, where did this year go? It has been a year since the Jack and Star puppies went to new homes with Soliel staying here at Smiling Dalmatians. Alot has happened.

In January Sally, Smiln Dal's Letter To Santa, finished her Championship at the Sand And Sea Non Sporting Group specialty. Since then she also finished her Grand Championship along with several obedience titles. Owner/handler is now in the number 1 spot as a Junior Handler for Dalmatians! 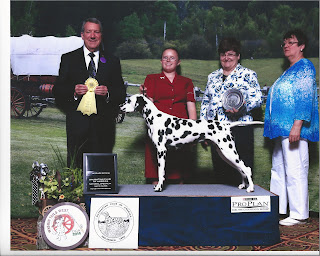 In February Molly, Dvlstr Smiln Pretty In Pink, finished her Championship at a supported entry following the Dalmatian Club of San Diego County specialty, and is now expecting puppies with Brigham, GCH Rockledge's Bring Them Young. Puppies are due November 20th. Check our website for more information on the exciting joint venture with Rockledge Dalmatians. 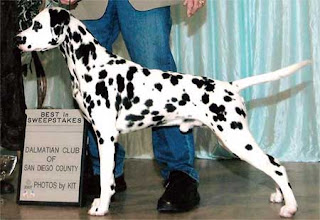 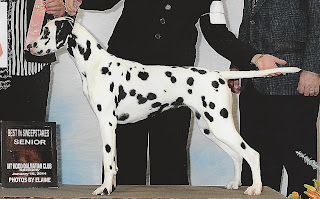 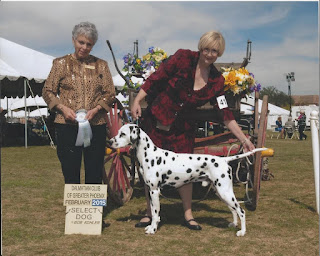 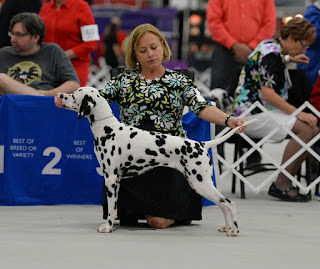 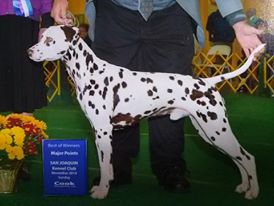 Also in October, Soliel, Smiln Royal Sunshine And Summertime, entered the ring for the first time. She placed in her class every day and we are excited about the possibilities for next year! 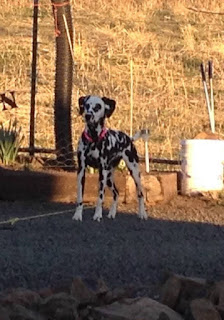 Please come back and see us again. We will be posting more information about the Brigham and Molly puppies here and on our website www.smilingdalmatians.com.

Meanwhile, Happy Holidays to you and yours, Merry Christmas and Happy New Year!
Posted by Smiling Dalmatians at 11:05 AM No comments: